Northam: Fate of Confederate statues should be left to localities in Virginia 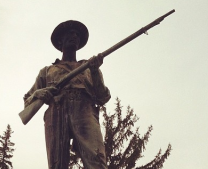 “But for many others, Confederate memorials are a reminder of the enslavement and torture of their ancestors.”

Governor Ralph Northam on their different perspectives of how residents and tourists view the more than 200 Civil War monuments and memorials across Virginia.

Northam said Thursday he is backing legislation that will let cities, counties, and towns decide if those historic displays should be left alone or taken down and retired elsewhere.

The governor also wants a statue of Civil War General Robert E. Lee removed from the Natural Statuary Hall collection at the US Capitol. His plans also include more grant funding to refurbish slave gravesites and erect more markers that he says will represent a more modern and diverse Commonwealth.