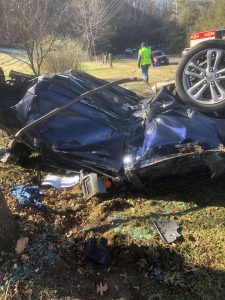 A runaway teen from North Carolina was hospitalized after she crashed her vehicle during a chase on Interstate 81 that involved deputies from Smyth County.

A report from Sheriff Chip Shuler said the 16-year-old female from Fayetteville was traveling in a car stolen from Fort Bragg and the pursuit which began in the Exit 54 area of Marion reached speeds of over 100 miles per hours. The sheriff said the teen lost control and the car went over an embankment, hit a power pole, and rolled several times.

Shuler also noted that the child’s parents had been contacted.