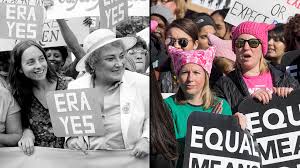 State lawmakers in Virginia are set to take a major step making Virginia the critical 38th state to ratify the Equal Rights Amendment to the United States Constitution. The Virginia House and Senate, both controlled by Democrats, are expected to advance the gender equality measure in votes on Wednesday. The votes will be a symbolic victory for many women’s rights advocates and a sign of how much once solidly conservative Virginia has changed since the ERA was adopted and given to the states in 1972.