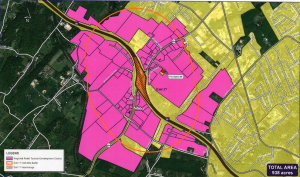 The Johnson City Commission has unanimously approved for a third and final time an ordinance designating boundaries for a proposed regional retail and tourism development district in the Boones Creek area.

Despite certain issues brought to light by attorneys including Don Spurrell representing opponents of the district like potential conflicts of interest and questions about the location of the district, as well calls to delay the vote, city commissioners did not hesitate in giving the nod to the ordinance, which was part of a bill passed in last year’s General Assembly.

This essentially grants Johnson City an opportunity to maintain 75% of the state share of local sales tax to recruit new businesses to the area.

This now goes to the state for final approval.