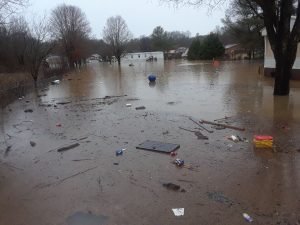 Local and state officials are urging drivers to use caution traveling after several inches of rainfall resulted in water rescues, road closures, and evacuations in some neighborhoods in Northeast Tennessee and Southwest Virginia.

Data from the National Weather Service was forecasting the Clinch River in Speers Ferry, Virginia in Scott County to crest at 28 feet—a level not seen since the late 1970s. The Tri-Cities region averaged 3.5 inches of rain in a 24 hour period, according to preliminary stats.

Members of Bristol’s swift water rescue team were being deployed in Tazewell County, Virginia to help with evacuations including several in the town of Richlands. A total of five counties in Southwest Virginia were placed under a state of emergency due to floodwaters.

A spokesperson for rescue units in Greene County, Tennessee said two men were rescued on Roaring Creek Road in the Baileyton community just after 4 p.m. Thursday after they drove into high water and became stranded on their vehicle’s top. The patients were taken to a local hospital for treatment of non-life threatening injuries.

Check out our flooding blog from Thursday to access up-to-date weather data from the National Weather Service.