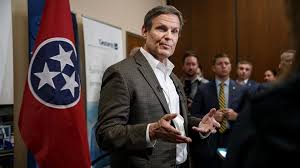 Tennessee Gov. Bill Lee on Thursday defended the rollout of his much-debated school voucher program and downplayed recent anger from lawmakers upset with how the state has prepared to give parents tax dollars to pay for private tuition.

“I care more about kids in this state than I do about a process that is trying to be hampered by those who are detractors to a process,” Lee told reporters. “I don’t think the status quo has served us as it should.”

Scrutiny over the voucher program in recent weeks has focused on the Department of Education’s decision to award a $2.5 million non-compete contract to Florida-based vendor ClassWallet to help administer the applications and funds once the state’s voucher program begins in the summer.

In 2019, while approving the voucher law, lawmakers budgeted approximately $730,000 to administer the school voucher program no later than the 2021-22 school year. Yet in November, the education agency announced it had signed a multiyear $2.5 million contract with ClassWallet through a no-bid contracting process.

The agency later clarified that it had taken money from a now phased-out education program to help cover the extra costs. The move has sparked alarm from some lawmakers but Lee says the department followed the correct steps as allowed under the statute.

“The Legislature may look at and has suggested a different process moving forward, but right now that’s the process in our state that’s worked well and that’s what we’re using,” Lee said.

Earlier this week, a Democratic member requested an investigation by the state comptroller’s office to ensure no laws were broken by the agency.

Meanwhile, House Republican Caucus Chairman Jeremy Faison admitted he regretted voting in favor of the measure and Republican Rep. Matthew Hill has demanded proof from the education agency that there was no other vendor available to implement the voucher program.

Education Commissioner Penny Schwinn, along with several members of her senior team, has defended choosing ClassWallet through a non-competitive process, arguing that the company is the only vendor that could provide enough security and expertise in time to ensure a smooth rollout of the school voucher program in August.

“We’re working to make sure it’s done in the right way and rolled out in a quality fashion as soon as possible so kids can start having access to that quality education and we’re moving forward with that,” Lee said.