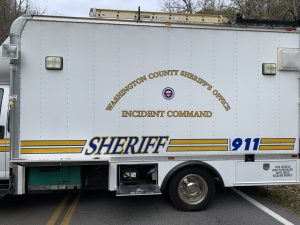 Authorities in Washington County, VA are working a homicide investigation off Campground Road.

Sheriff Blake Andis earlier this morning told Supertalk that they received a call around 3:30 Monday morning of a body laying in the road between Cowan Drive and Wagner Road on Campground Road, and when officers arrived, Andis says it appeared that the subject had been murdered. That roadway has been closed all morning as officials remain on scene.

Andis also said crews were awaiting to work with a bomb dog to look for any further evidence at the scene. As far as the identity of the victim, that information has yet to be released pending notification to the family. We’ll keep you updated on this developing story.