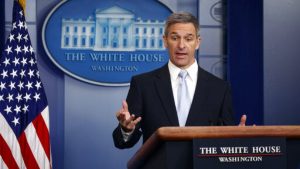 A judge also said that immigrant asylum rules Cuccinelli put in place last year must be set aside. The suit was brought by a policy protection group representing five Hondurans seeking to locate in the US who said current prep time for asylum seekers for initial screening interviews was against the law.

The Trump administration said in a statement that they plan to appeal. Cuccinelli remains at the top post at US Citizenship and Immigration Services.