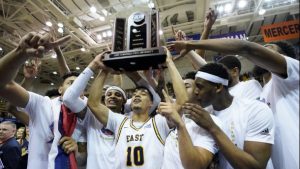 Forbes guided the Buccaneers to 30 wins this year and 130 victories in five seasons in Johnson City. The network said that any major team that would have drawn ETSU in the tournament would have been ripe for an upset considering how the Bucs were playing and navigating a tough Southern Conference schedule.

ETSU 2019-2020 campaign included a signature win at LSU and a close contest with post-season coaches poll number one Kansas.