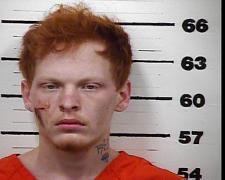 Police in Hawkins County have captured an armed and dangerous man wanted for several charges including two counts of aggravated assault on officers and theft of a vehicle.

The Hawkins County Sheriff’s Office says yesterday they served a warrant to arrest Devin Rose, 19, at a home in Church Hill. Rose’s girlfriend Haley Powell and her mother Amy Powell advised no one was at the home, according to a police report, but officers say they later found Rose hiding under a bed in a locked bedroom. Haley and Amy Powell were also arrested and charged with accessory after the fact.

The arrest stems from an incident on Tuesday evening, where a Hawkins County deputy responded to a report of a possible location to a stolen vehicle at the Whistle Top Store in Church Hill. They then responded to a home on Hickory Hills Road in Church Hill, where they located Rose. Deputies told him to stop, but Rose fled on foot, got into the stolen vehicle, and drove away, nearly striking the deputies. Rose then drove off, striking multiple fences, and collided with a patrol car, causing damage to the cruiser.

The Hawkins County Sheriff’s Office says the investigation is ongoing.