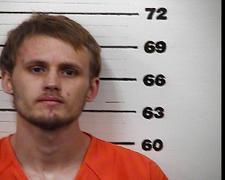 A Hawkins County Sheriff’s Deputy was bitten in the neck while arresting a Kingsport man on drug charges. 25 year old Chance Crawford was found standing outside his vehicle on McCracken Lane in Mount Carmel and told the responding officer someone was in his car and his seats were moving. The officer asked Crawford he was on any medication and Crawford responded yes including ecstasy . Following a search, the deputy found more than four grams of methamphetamine as well as other drugs in Crawford’s possession. While being transported to jail, Crawford began kicking the cruiser’s doors. The deputy stopped the cruiser and pepper sprayed Crawford and the two became involved in an altercation and Crawford bit the deputy on the neck. Backup was called and Crawford was finally restrained and transported to the Hawkins County jail. Crawford is charged with numerous offenses including Assaulting an Officer and Resisting Arrest.