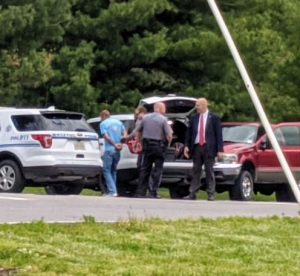 Two eyewitnesses who spoke with us Thursday afternoon said all signs point to a road rage incident on King Mill Pike that escalated into a shooting.

Bristol Virginia police were called to the scene just before 1:30 p.m. and found a man lying near the roadway with gun wounds. BVPD Captain Maynard Ratcliff said the victim was alert and talking while he was being treated and then taken to an area hospital for treatment.

Christopher Slaughter lives half-a-block from the site of the incident and he said he heard the commotion of men arguing and then heard two gunshots. He then exited his home and saw the victim lying on the ground while the other men stood there.

James Gilmer was returning home from work when he passed the men fighting. He saw one of the men throwing a punch

One individual was taken into custody and charges are pending.