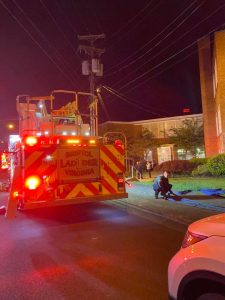 The Bristol, VA Professional Firefighters Association says they along with other crews responded to an alarm late last night at Douglas School Apartments. Crews says when gaining access to the building, they noticed heavy smoke on the second floor, and were able to rescue one person from the fire room who was treated for smoke inhalation.

Four other people were also rescued and treated before crews were able to extinguish the fire.