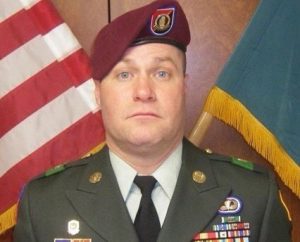 An annual celebration of military heroes at Charlotte Motor Speedway will feature a connection to the Tri-Cities during this year’s Coca Cola 600.

A report from NASCAR says the name of fallen Kingsport soldier Sgt. First Class Jason Hickman will adorn the top windshield of Joey Logano’s No. 22 Ford during Sunday night’s feature.

Hickman was killed in 2010 while serving in Afghanistan.

Hickman’s teenage son Landon contacted Logano for an autograph during Christmas and said he hoped to attend the Charlotte race to see the soldiers’ names that are adhered to each of the entrants’ cars.

Logano’s foundation then contacted the Hickman family to ask permission to post their dad’s name on the rolling tribute.