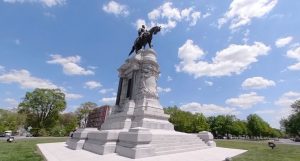 Officials with the VA Dept. of General Services are expected to inspect the Robert E Lee Monument in Richmond throughout Monday.

A statement from the state agency says they have sent crews to the state capital to examine the 12 ton, 21 foot tall monument in anticipation of removing it as soon as possible. This comes following an announcement from VA Governor Ralph Northam last week on plans to remove the Confederate General’s monument off of Monument Avenue, saying it only has symbolized a lost cause and racism.

There has been no date set as to when it will be removed and once removed, it will go in storage until a decision can be agreed upon on where it’s new home will be.

A full statement from the VA Dept. of General Services is below:

“The Department of General Services is dispatching crews to inspect the Robert E. Lee monument this morning. This is part of our planning to remove the statue as soon as possible, and to do it safely, as Governor Northam ordered.

“This is an old and heavy piece. The massive statue weighs approximately 12 tons, stands 21 feet tall, and has been on a 40-foot pedestal for 130 years. Meticulous planning is required to remove an aging monument of this size and scale safely.

“The monument will not be removed today.

“The Department is working with public safety partners to secure the area around the monument this morning so crews can work. We ask for your cooperation to ensure the safety of everyone on the ground—statue removal workers, neighbors, and everyone exercising their First Amendment rights. We also ask for your patience as the state works through this complex project.”

Analytical work is expected to be completed by mid-day. Traffic may be diverted during this time.