Angela Boswell, William McCloud, have theft of property charges bound over to a grand jury 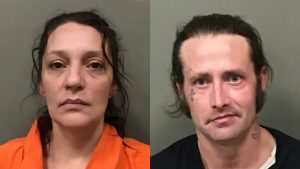 Two people charged with theft of property, including the grandmother of deceased toddler Evelyn Boswell, will have their case head to criminal court in Sullivan County in August.

Angela Boswell and William McCloud are each charged with theft of property over $2,500 in connection to a reportedly stolen BMW back in February. During a preliminary hearing Tuesday in Bristol, the court heard from two eyewitnesses including the owner of the vehicle Melissa Wood and Detective Jason Adams of the Wilkes County, NC Sheriff’s Office who was involved in arresting McCloud and Boswell.

Melissa Wood told a judge that she intended to sell the car and loaned it to Megan Boswell on Feb. 13 to be looked at because it was having issues before allowing it to be purchased. Wood stated she never received any money for the car and had trouble keeping in contact with Megan other than through contact with her son, Hunter Wood, who was Megan’s boyfriend at the time. Wood also said she was contacted by the Sullivan County Sheriff’s Office about the car reportedly being stolen before she ever reported it.

Melissa stated she never gave permission for Angela or William to drive the car, and never entered into in any agreement with Megan about purchasing the car. Melissa also told the court the vehicle is in her son’s name, who which she has power of attorney over. Suspects Angela Boswell, the mother of Megan Boswell and grandmother of deceased toddler Evelyn Boswell, along with William McCloud, were found in the car in NC a week later and were arrested.

Jason Adams with the Wilkes County, NC Sheriff’s Office says he was contacted by the FBI Office in Asheville about a stolen BMW possibly related to an Amber Alert out of Sullivan County. He told a judge he along with two other detectives pulled over the vehicle with Boswell and McCloud in possession. Adams says Angela claimed they owned the car and had purchased it from her daughter’s boyfriend, but could not provide documentation. An arrest warrant had been issued for McCloud, and the vehicle was entered into NCIC, leading to the pair’s arrest.

Adams stated officials with the Sullivan County Sheriff’s Office arrived later on in the evening with arrest warrants. A Sullivan County detective later received permission from Angela to look at her phone, leading to an extraction report of text messages that was given to the court. Neither faced other charges in Wilkes County according to Adams and he confirmed the tags on the BMW were the same that which was entered into NCIC.

A judge bound over their case during the hearing and they are scheduled to be back in court August 14th at 9:00 a.m.