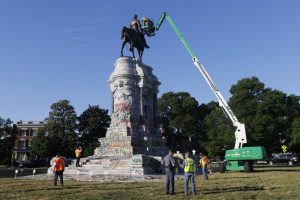 The temporary injunction order issued Monday says the state is a party to a deed recorded in March 1890 in which it accepted the statue, pedestal and ground they sit on and agreed to “faithfully guard” and “affectionately protect” them.

It is in the public interest to await resolution of the case on the merits prior to removal of the statue, the order says.

The lawsuit was filed by William C. Gregory, who is described in the complaint as a descendant of two signatories to the deed. Named as defendants are Northam and the director of the Department of General Services, the agency tasked with handling the removal.

“(Gregory’s) family has taken pride for 130 years in this statue resting upon land belonging to his family and transferred to the Commonwealth in consideration of the Commonwealth contractually guaranteeing to perpetually care for and protect the Lee Monument,” the lawsuit says.

Northam’s spokeswoman, Alena Yarmosky, said in a statement that the governor’s administration is still reviewing the order.

“Governor Northam remains committed to removing this divisive symbol from Virginia’s capital city, and we’re confident in his authority to do so,” she said.

Northam last week ordered the statue of Lee taken down, citing the pain felt across the country over the death of George Floyd, a black man in Minneapolis, after a white police officer pressed a knee into his neck.

Motivated by a bystander’s video of Floyd’s agony, demonstrators around the world have vowed to sustain a movement focused on addressing racial injustice and police brutality. In the American South, they’re also advocating for the swift removal of Confederate monuments, with or without the approval of authorities.

Opponents of the monuments say they celebrate white supremacy and gloss over the nation’s history of slavery. Others who advocate for keeping them say they have historical or artistic value and their removal amounts to erasing history.

Authorities have removed other symbols since protests erupted two weeks ago, including a massive obelisk in Birmingham, Alabama, and a bronze likeness of Admiral Raphael Semmes that had stood in a middle of a downtown street near the Mobile, Alabama, waterfront for 120 years. In Fredericksburg, Virginia, a 176-year-old slave auction block was removed from the city’s downtown, and the United Daughters of the Confederacy removed its statue from Old Town, Alexandria.

In other cases, protesters aren’t waiting: In Richmond over the weekend, protesters toppled a statue of Gen. Williams Carter Wickham in a park near downtown, and in Bristol, England, a statue of slave trader Edward Colston met a watery end.

Northam has said the enormous Lee statue would be removed “as soon as possible” and his administration would seek public input about its future.

Crews inspected the statue earlier Monday as part of the planning for its removal.

“The massive statue weighs approximately 12 tons, stands 21 feet tall, and has been on a 40-foot pedestal for 130 years. Meticulous planning is required to remove an aging monument of this size and scale safely,” the Department of General Services said in a statement.

Four other Confederate monuments dot Monument Avenue, a prestigious residential street in Richmond, which was also the capital of the Confederacy during the Civil War. Richmond’s city council has affirmed unanimous support for removing the other four, according to The Richmond Times-Dispatch.

Together, they are among the nation’s most prominent collection of tributes to the Confederacy, and their planned removal has been widely praised by black leaders and activists.