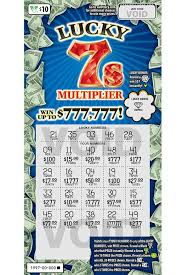 A Smyth County Virginia man on Tuesday has thousands of reasons to feel lucky. Actually Allen Shelton has 777 thousand 777 reasons to be lucky after winning the Lucky 7’s Multiplier scratch off card worth more than 777 thousand dollars. Shelton bought the ticket a Shirley’s Market in Sugar Grove. Shelton says after he discovered he’d won the games top prize of 777,777 dollars he returned to the market to celebrate. The game features prizes ranging from ten dollars to 777 thousand 777 dollars and Shelton beat the odds of one in 734 thousand and plans to take care of his family and maybe buy a new truck.