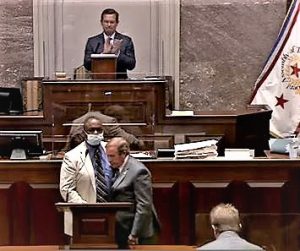 A rarity in Nashville Monday night as Ooltewah lawmaker Mike Carter goes to the well of the Tennessee House for a public apology following a fried chicken joke aimed at Memphis’ Joe Towns, Jr.

“Mr. Speaker, thank you for allowing me to address the body tonight and my friend Joe Towns from Memphis. Today earlier in a committee meeting I said something stupid,” Towns said, his voicing breaking emotionally during the apology.

Towns said he didn’t hear the remark during the earlier session but was caught off guard given the recent racial climate of the US with demonstrations nationwide following the death of George Floyd in Minneapolis.

He accepted the apology but reminded Carter and the ruling body that problems like this would have to be solved together.