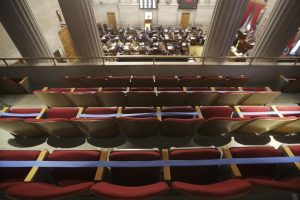 Tensions erupted Tuesday on the Tennessee House floor after Republican lawmakers refused to advance a resolution memorializing a young a black woman shot and killed in her car earlier this year.

Democratic members had sought to acknowledge Ashanti Nikole Posey, a 17-year-old girl who was murdered in April at an intersection in Nashville.

“Ashanti Posey will be sadly mourned but fondly remembered by her parents, her six siblings, and the many friends, teammates, classmates, and acquaintances who had the opportunity to share even just a moment with this extraordinary young woman,” the resolution read.

Police officers had said that Posey was killed after she and a friend made a “small marijuana sale.”

The marijuana sale has never been proven. However, House Majority Leader William Lamberth helped block the resolution from advancing after he told the chamber he could not support the legislation due to the circumstance surrounding Posey’s death.

“I did some research and looked up exactly what led up to her untimely demise and due to the behavior, and I will say choices that she was involved with at the time, I cannot in good conscience vote in favor of this,” Lamberth said. “I wish I could support this legislation, but I simply cannot given the activity of her demise…to applaud that individual on the House floor, I cannot support.”

Lamberth’s remarks resulted in 49 Republicans declining to vote on the measure. While a mix of 45 Democratic and Republican lawmakers voted in favor in the House, it was not enough to meet the minimum threshold to clear the House floor.

The GOP-dominant Senate had unanimously approved the resolution just the week before.

The surprise spiking of the resolution sparked emotional responses from lawmakers. Rep. Antonio Parkinson, a Democrat from Memphis, repeatedly screamed his shock and anger — which included several expletives —- on the House floor despite multiple warnings from House Speaker Cameron Sexton.

“That was an all-time low,” Parkinson later told The Associated Press. “For her character to be assassinated publicly? With her parents probably watching? They’re going to see this. We were there to talk about and memorialize a 17-year-old child.”

Meanwhile, protesters who had been sitting in the House gallery also erupted into claps and jeering. Their disruption forced Sexton to ask state troopers to remove them from the Capitol.

The debate can be viewed by clicking here.