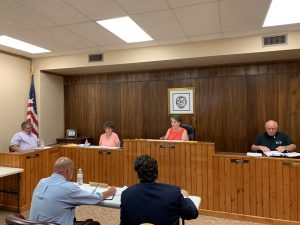 The Mount Carmel Board of Mayor and Alderman has accepted the resignations of former Mayor Chris Jones and Alderman Carl Wolfe.

The duo resigned following a writ of ouster issued on allegations of official misconduct that they allegedly conspired to form a fake eviction notice using the town’s seal to evict Jones’s girlfriend from a home owned by Wolfe.

During a meeting Thursday night, the board appointed Jennifer Williams in a 4-1 vote from Vice Mayor to mayor. Williams will serve in the mayoral role until November and told us this following the meeting.

“I feel great, very optimistic, and positive about the Town of Mount Carmel,” said Williams.

Pat Stilwell was selected to the vacant vice mayor role, while Garrett White and Theresa Mawk were selected as new alderman.