New statute in Virginia: Localities can have Confederate monuments taken down 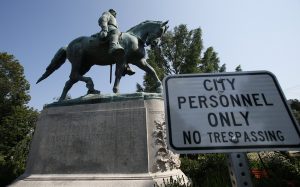 That statute now takes effect and could impact the future location of the more than 20 Civil War markers spread out across Southwest Virginia that have stood for decades in town squares and courthouse campuses.

Northam noted part of the reason for the option for local governments came from the controversy during a white supremacist rally in August 2017 in Charlottesville where those monuments and the decision to take them down by city officials spurred violence and resulted in the death of city resident and protester Heather Heyer when a driver drove into a crowd.

Many anticipate court battles across the Commonwealth with preservation groups planning to fight the order. Northam’s pledge to remove the Robert E. Lee statue from Monument Avenue has been stalled by an injunction to prevent its removal.