Tennessee Gov. Bill Lee makes a trio of stops Tuesday in the Tri-Cities 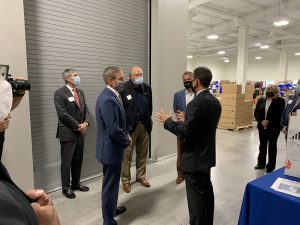 Tennessee Gov. Bill Lee was present in the Tri-Cities on Tuesday for a pair of ribbon cuttings for regional businesses and a visit to a well known outdoor small businesses.

Lee’s first stop was in Johnson City for a ribbon cutting ceremony for LabConnect, who announced earlier this year plans to move its corporate headquarters from Seattle, WA to Johnson City, and is expected to create over 200 jobs with a nearly $9 million dollar investment.

The Governor then traveled to Erwin for a second ribbing cutting for PlastiExports, who’s operations are now housed in the former Morrill Motors location, which parent company Regal Beloit announced last Sept. plans to close operations by this month. PlastiExports, who’s company is based out of Mexico, chose Unicoi County for its first US facility, and is anticipated to create over 100 jobs and close to a $7 million investment.

The Governor wrapped up his visit back in Johnson City to tour Mahoney’s and promote the state’s small business relief program.

During an interview with local media, Lee says he’s encouraged with the state’s direction and response to the COVID-19 pandemic as the state passes the six month mark. Lee highlighted several factors like how TN has one of the best COVID-19 testing rates in the country, as well as one of the lowest death per capita rates in the United States. Additionally, the Governor discussed the immense focus the state has put on protecting the most vulnerable populations like in nursing homes, as the state was the first in the nation to develop testing for every nursing home resident.

“We believe (our efforts) towards protecting nursing homes has contributed to the lack of death resulting from COVID,” said Lee.

Lee did not mince words about the pandemic, saying, “it’s been a huge challenge as a lot of people have suffered as well as suffering economically.”

The Governor feels the decision to be among the last states to shutdown while being one of the first state’s to reopen is a very encouraging sign for the Volunteer state’s economy.

“We’ve got a long ways to go, but Tennesseans have done what they’ve needed to do, and they’ve stepped up and responded with personal responsibility, which we are now seeing the results of that,” Lee said.

Below is a photo gallery from Supertalk reporter Trey Adams, who followed the Governor’s visit to the region: