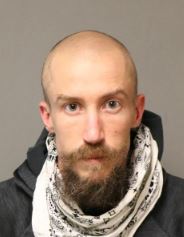 A Marion, Va man has been arrested in connection to an alleged hatchet attack Sunday at a church in Grayson County.

Virginia State Police say Gregory Graham, 31, was taken into custody Tuesday afternoon at his home on one count of malicious wounding. Additional charges may be coming according to state police. Graham is accused of attacking an off-duty state trooper at a church by swinging a hatchet, striking the trooper’s hand, who received minor injuries.

No other individuals at the church were injured. Graham is being without bond in the New River Regional Jail.