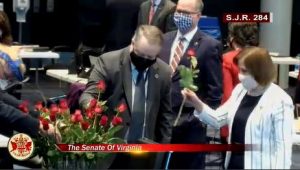 The opening day of the Virginia Senate on Wednesday was shrouded with sadness as their fellow lawmaker’s desk was draped in black.

Senators stood in unison for a silent vote inside the Virginia Science Museum–their temporary home for a second year due to the pandemic–to pass Senate Joint Resolution 284 that honored the life of the late Senator Ben Chafin.

Chafin died in Richmond earlier this month after being treated for COVID-19.

Following the vote, Lt. Gov. Justin Fairfax directed members to take a rose placed on their desk and place it in a vase posted on Chafin’s desk.

Senate Minority Leader Tommy Normant said Chafin made a flawless transition from attorney to senator with the way he examined each piece of legislation. He also called the Russell County native a masterful negotiator.