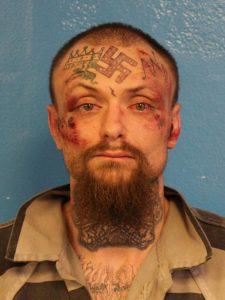 An Elizabethton man is in jail on numerous charges following a chase from Carter into Sullivan County over the weekend.

The Sullivan County Sheriff’s Office received a call from the Carter County Sheriff’s Office Friday night that they were pursuing a Chevy Colorado pickup truck that struck one of the agency’s vehicles. Sullivan County deputies picked up the chase on Highway 394 near the 11E intersection in Blountville and later deployed two spike strips, where the vehicle eventually slowed into a gas station parking lot.

Officers say suspect Robert Ray, 34, refused to get out of his vehicle and was removed by deputies. A handgun fell out of his pocket as he was being placed into custody, later to be determined to be a .22 caliber revolver with three rounds in the cylinder. Ray had a warrant for his arrest out of Carter County that included charges of attempted first-degree murder, aggravated assault, and possession of drug paraphrenalia.

Ray was taken to the Sullivan County jail and booked on a $20,000 bond.