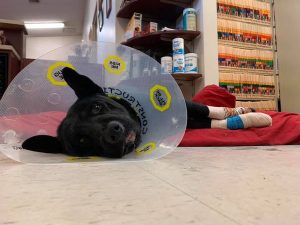 A reward of $2,500 is now available for information that leads to the arrest and conviction of two suspects accused of deliberately dragging a dog behind their car in a Kingsport church parking lot.

UPDATE: Our Criminal Investigators are continuing to search for the suspects responsible for severely injuring a dog at…

Business owner Weston Leonard who is chipping in $1,000 as part of the fund said on Facebook that the dog was literally skinned down to the bone over parts of his body and his toenails were gone after trying to stop being dragged.

The incident occurred on Jan. 28th at Gospel Mission Church. The two individuals were driving a four-door white sedan. The Sullivan County Sheriff’s Office is in charge of the investigation.

The dog, whose has been named ‘Church’ by his caretakers, continues to receive treatment at the Andres-Straley Veterinary Hospital in Kingsport.