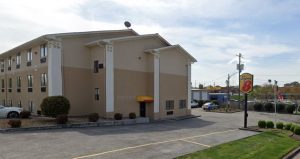 Police in Johnson City are searching for a man accused of robbing motel over the weekend.

Authorities say they received a report of a robbery Saturday evening just after 6:30 p.m, where an investigation found a black male entered the Super 8 Motel, allegedly threatened an employee with a gun, and demanded money before leaving the business with an undetermined amount.

The incident is under investigation and anyone with information on the robbery is asked to call the Johnson City Police Department.