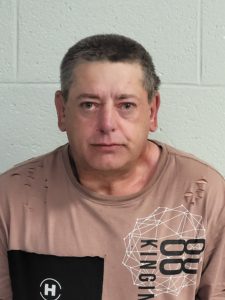 A Jonesborough man is scheduled for arraignment following his arrest Thursday on Aggravated Burglary and Evading Arrest charges, after a home owner was alerted by a security system on his phone of suspicious activity. 48 year old Steve Hardin was captured on a video security system forcing his way into a home on Cherokee Road. Investigators attempted to make contact with Hardin at his Dry Creek Road residence, but fled into nearby woods, where a K9 officer tracked him and he was captured. Hardin was jailed on a 20 thousand dollar bond at the Washington County Tennessee Detention Center.