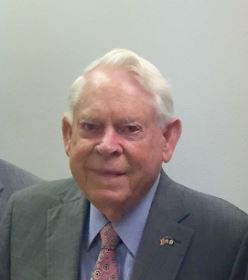 One of Southwest Virginia’s legislative anchors for more than three decades in the General Assembly has died.

Several of his fellow constituents and lawmakers feted Delegate Joe Johnson of Hayter’s Gap on social media Friday following news of his passing.

Johnson served in the House of Delegates twice, once during the late 1960s and voted in again in 1990 where he served until his retirement in 2014.

Delegate Isreal O’Quinn issued the following statement about Johnson: “Delegate Joe Johnson was one of the kindest people to ever serve in public office. He was an advocate for Southwest Virginia and someone who was universally liked. We were both proud to be from Hayter’s Gap and always shared stories from the community. It was also one of the highlights of my professional career to serve my first term in the House of Delegates alongside Joe.”

"Our friend and colleague, Joe Johnson, has passed. Joe, a true gentleman, was one of Southwest Va.'s most dedicated public servants. A strong advocate for his community, Joe was one of the kindest, nicest men I’ve ever met." – House Speaker @cToddGilbert https://t.co/VgdxIbLuUF