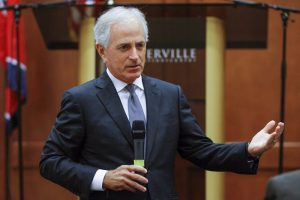 Tennessee’s congressional delegation in Washington split in their voting on last weeks approved one point three million dollar federal spending plan. Republican Lamar Alexander voted yes, while Republican Senator Bob Corker voted no, saying it was the most grotesque bill he has seen in his eleven years in Washington. In the House, Republican Phil Roe also voted in favor of the spending document which will fund the U.S. Government through September of this year.