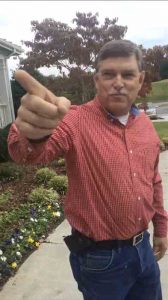 The Tennessee State Registry of Election Finance will hear and consider an allegation of possible ethics violations against Washington County Republican Mayoral Candidate Mark Ferguson and a political action committee….however, that hearing will come two weeks after the primary election. Joe Grandy alleges that the Political Action Committee Taxpayers Fighting Back and Ferguson are illegally coordinating during the campaign. Ferguson denies the allegations. The Primary election is May first. The hearing will be held two weeks later on May 14th.