Sunday Liquor Sales Go Off Without A Hitch 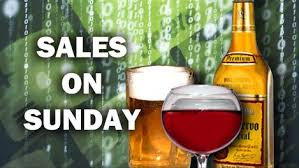 It looks like the first day of statewide liquor sales on Sunday went off without a hitch yesterday. A new law allowing liquor stores and grocery stores to sale wine and spirits was recently signed into law by Governor Bill Haslam. The law allows liquor stores to open on Sundays from ten a.m. Till 11p.m. Grocery stores will not be allowed to beginning selling wine on Sundays until January first.