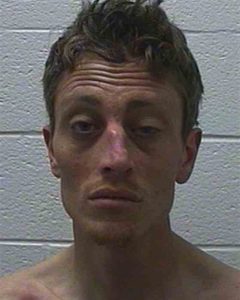 A Johnson City man is jailed after committing several crimes including aggravated robbery. Police arresed 33 year old Christopher Brown of 528 Pine Lane after reportedly forcing his way inside a home on Huffine Road. Brown and three others are accused of stealing a woman’s keys, and cell phone and then driving away in her vehicle. Not long afterward a report of another robbery, this one at a Tobacco store on South Roan Street was called in. Police quickly identified the vehicle and conducted a traffic stop. Inside the vehicle, police found the cell phone of the victim and a sawed off shotgun. Brown is being held on a 58 thousand dollar bond in the Washington County Tennessee Detention Center.