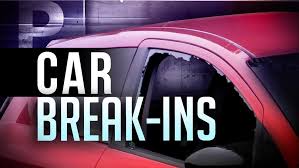 A foot chase by police ends with the arrest of a Johnson City man and a confession to numerous auto break ins in the West Market Street and Indian Ridge Road area. 19 year old Jonathan R. Hughes was wanted on vandalism charges when he was spotted by police. Hughes ran from authorities but was apprehended a short time later. While in custody, Hughes admitted to the breakins. He is charged with four counts of auto burglary and vandalism and is scheduled for a court appearance Thursday.