One person killed after hit by train in downtown Johnson City 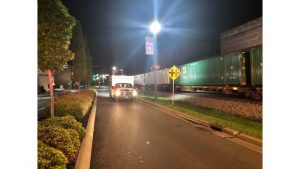 An investigation is now underway in Johnson City after a pedestrian was hit and killed by a train.

According to Washington County, Tennessee dispatch, the accident occurred near Buffalo and Market Street just after nine Tuesday night. Several roadways near the scene were blocked for several hours while crews investigated. The identity of the deceased has not yet been released.

We will keep you updated as we find out more on this developing story.