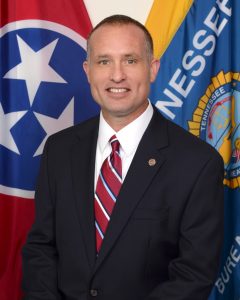 Pending an investigation into misuse of state funds, Acting Director of the Tennessee Bureau of the Investigation, Jason Locke, may be placed on administrative leave with pay. If so, it would take effect June 20th.

Tennessee’s Lieutenant Governor Randy McNally is quoted saying, “The allegations against Jason are extremely troubling. If I were advising him, I would counsel him to resign for the good of his family and the bureau.”