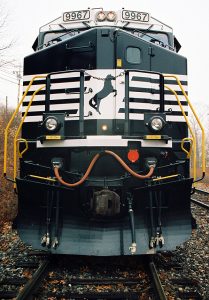 A train fire in Greeneville has prompted a temporary evacuation of some homes in the area.

An engine with Norfolk Sothern became engulfed in flames close to the Maple Street Bridge. No one was injured in the incident and authorities say the fire has burned out on its own.

According to Authorities the company is sending in a crew from Knoxville to assess the damage and aid with cleanup.tRAIN