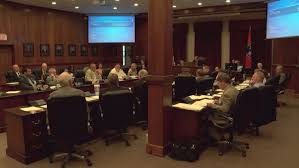 Members of the Sullivan County Budget Committee now have their hands on an 84 million dollar school operating budget to fund a new high school, that also has nearly three million dollars in deficits and does not include money for athletic fields at the new school. School Board members are telling commissioners they plan to balance the budget and fund four point eight million dollars to pay for athletic fields at the new West Ridge High School near the airport with money from savings. A vote on th budget is expected in the next few weeks.