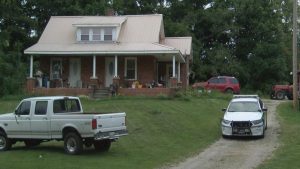 Two men are injured, one critically after an exchange of gunfire in Johnson County, Tennessee. Sheriff Mike Reece says the two, so far, unidentified adult males were involved in an apparent shootout at a home on Dry Hill Road near Butler around seven pm Wednesday. One man, critically injured with gunshot wounds to his chest and leg was flown to a hospital while the other was transported by ambulance… so far a motive for the shooting is unknown and the investigation is underway.