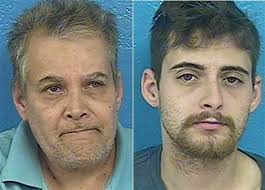 A father and son have been arrested in Kingsport after an argument with a family member’s boyfriend leads to an individual being seriously assaulted with a hammer. 52 year old Wendell Lark and 27 year old Nathaniel Lark face charges of aggravated assault during the incident at the Lark’s home on Lone Star Road. A 22 year old male victim, who is the boyfriend of Lark’s daughter was hit in the head with a hammer by Wendell Lark, as the younger Lark held the victim down and punched him. The victim suffered severe lacerations in the assault. The father and son are being held in the Sullivan County Jail.