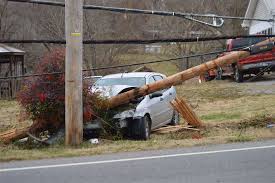 Kingsport Police are searching for two juveniles who are thought to have crashed a car into a utility pole on Bloomingdale Pike and may have stolen a pickup truck to get away. Police were called to a car crash that knocked down a power pole blocking traffic early Tuesday morning. Upon arrival, police discovered no one was at the crash scene. A short time later police were alerted to a stolen, red, Ford Ranger pickup truck and believe a juvenile male and female were also in the car that crashed earlier.