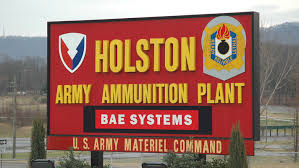 The United States Army says it is working to find a safer way to rid Holston Army Ammunition Plant of munitions waste instead of its current controversial outdoor burning method. Army represenatives met with neighbors who live near the plant as well as concerned citizens to discuss the plant’s proposed 450 million dollar expansion, which is good news for the economy, but not so good news if the plant increases the amount of waste it burns at its facility in Kingsport. The Army says it is doing everything they can to minimize what the ammunition plant burns in the open.