Sullivan County Now Has SRO At Every County School 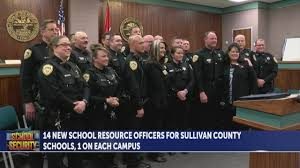 It took effort from the entire Sullivan County Commission, but it appears to have paid off as the Sullivan County School System now has a School Resource officer at every county school. In September County Commissioners voted unanimously to approve a resolution to fund 14 additional SRO’s. Sullivan County will pay half the cost while the sheriff’s department will incure nearly a million dollar payment to fund the officers the first year, with recurring costs of almost 750 thousand dollars each year. The new SRO’s will also be implementing a new anti drug program called LEAD, which stands for Law Enforcement Against Drugs this coming fall for all middle schools and fifth graders.