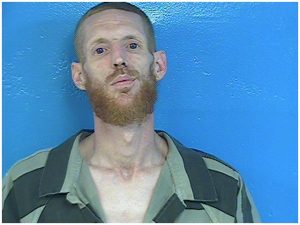 A high ranking member of the Vice Lord’s gang out of Hawkins County is behind bars after police say he allegedly threatened to shoot officers.

The Sullivan County Sheriff’s Office SWAT Team along with the Kingsport Police Department SWAT team arrested Dustin Keith Overbay, 35, of Mount Carmel, at a home on Friday June 28th in Kingsport, after finding him in the living room with a .38 caliber pistol. Overbay had outstanding warrants out of Hawkins and Sullivan counties and was charged for his outstanding warrant in addition to possession of a firearm by a convicted felon. Officers also arrested Matthew Carpenter, 36, the owner of the house that Overbay was staying at, as well as Brian Belcher, 34.

Brian Belcher was charged with being a fugitive from justice from Scott County Va. for a violation of probation for possession of schedule one and schedule two narcotics and is awaiting extradition to Virginia.

The investigation continues with additional charges possible. All three remain in jail without bond.