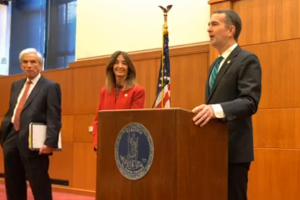 “We are here today to talk about legislation that will literally transform transportation in the Commonwealth.”

Governor Ralph Northam speaking at the Capitol to formally tout new highway bills that will range from making roads safer to accelerating funds to tackle a long list of improvement projects including some on Interstate 81.

The massive bill covers several points including enforcing an open container law that bans alcohol in automobiles, allowing localities to lower speed limits and banning the use of handheld cell phones while driving.

“These are proven safety policies that will save lives on our roadways and they’re just common sense,” he said

The governor also wants to raise the state’s gas tax to help supplement road dollars for new construction while giving drivers a break by cutting annual registration fees in half.

(PHOTO: Office of the Governor / Commonwealth of Virginia)