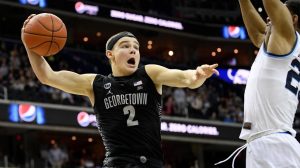 Gate City basketball standout Mac McClung is taking his talents away from the nation’s capital.

An ESPN report says McClung informed Georgetown officials that he was entering the transfer portal following a tumultuous stretch where he entered then exited the NBA draft.

McClung added that a number of different events while at the Big East school led him to the decision of leaving Georgetown.

Head coach Patrick Ewing said on Andy Katz’s podcast earlier this month that McClung had withdrawn from the draft and would be returning for his junior year. McClung said Ewing’s comments affected his pre-draft status and seemed to confuse a lot of teams.

McClung led Gate City to a state title and remains the VHSL’s all-time leading scorer. He also has more than 730,000 followers on Instagram due to his internet-sensation dunks that have millions of views since his time in Scott County.