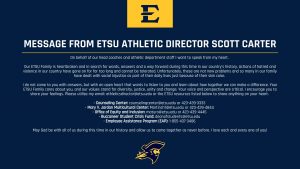 ETSU Athletic Director Scott Carter has released a statement in response to the death of Minneapolis resident George Floyd.

In a tweet, Carter discussed how the ETSU family is heartbroken and in search for words and answers during this time in the country’s history. Carter also went on to in his statement, “I do not come to you with answers, but with an open heart that wants to listen to you and learn about how together we can make a difference.”