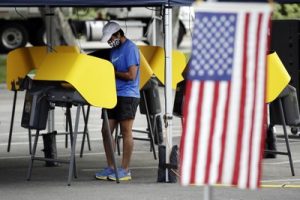 Tennessee must give all of its 4.1 million registered voters the option to cast ballots by mail during the coronavirus pandemic, a judge ruled Thursday.

Davidson County Chancellor Ellen Hobbs Lyle ruled that the state’s limits on absentee voting during the pandemic constitute “an unreasonable burden on the fundamental right to vote guaranteed by the Tennessee Constitution.” The judge wrote that any eligible voter can get an absentee ballot to avoid contracting or passing on COVID-19 in the “upcoming elections during the pendency of pandemic circumstances.”

The decision upends a determination by Republican Secretary of State Tre Hargett’s office that fear of catching or unwittingly spreading the virus at the polls wouldn’t qualify someone to vote by mail, The state argued such an expansion wouldn’t be feasible for the 2020 elections, claiming lack of money, personnel and equipment for increased voting by mail, among other concerns.

The decision requires the state to “prominently post on their websites and disseminate to County Election Officials that voters who do not wish to vote in-person due to the COVID-19 virus situation are eligible to request an absentee ballot by mail or that such voters still have the option to vote in-person during Early voting or on Election Day.”

The judge wrote that the state has taken an “unapologetic” position and has relied on “oddly skewed” assumptions — including assuming preparations for 100% of registered voters to vote absentee if all were allowed — that go against its own expert and industry standards. Eleven other states, meanwhile, have taken a “can-do approach” by relaxing voting by mail restrictions for the 2020 election, while two-thirds of states have allowed vote by mail for everyone for years, Lyle wrote.

“When, however, normal industry-recognized assumptions are used, the evidence establishes that the resources are there to provide temporary expanded access to voting by mail in Tennessee during the pandemic if the State provides the leadership and motivation as other states have done,” the judge wrote.

Hargett spokeswoman Julia Bruck indicated that the fight is expected to head for an appeal. The attorney general’s office blasted the court’s decision as failing to appropriately consider the “extensive safety measures” within the state’s COVID-19 election plan.

“It is yet another court decision replacing legislation passed by the people’s elected officials with its own judgment, largely ignoring the practicalities of implementing such a decision, and doing so in the midst of a pandemic and budget crisis,” Attorney General Herbert Slatery said in a statement.

Tennessee has more than a dozen categories that qualify someone for an absentee ballot, from being sick to being 60 or older.

The Republican-led Legislature and GOP Gov. Bill Lee have dismissed the idea of offering absentee ballots to all voters, with lawmakers voting against Democratic expansion proposals more than once this week as they meet during pandemic times.

Instead, state election officials have recommended preparations as though all 1.4 million registered voters 60 and older — about 1 of every 3 registered voters — will cast mail-in ballots in the Aug. 6 primary. Historically, Tennessee has historically seen less than 2.5% of votes cast by mail, the state has said.

Several states who have refused have been sued, including Texas, where a federal judge last month ordered absentee voting be made available to any voter in the pandemic.

Tennessee’s August election will be another test case as U.S. states try to safely prepare for the fall general election highlighted by the re-election bid of President Donald Trump, who has been staunchly against opening up absentee voting to everyone during the pandemic.

The state court lawsuits were led by #UpTheVote901 and by the American Civil Liberties Union of Tennessee.

“This is a major victory for voting rights, said Dale Ho, director of the ACLU’s Voting Rights Project. “This ruling eliminates the excuse requirement for the 2020 elections, meaning Tennesseans will not have to risk their health in order to vote.”

The Lawyers’ Committee for Civil Rights Under Law and the Campaign Legal Center have filed a similar federal lawsuit.