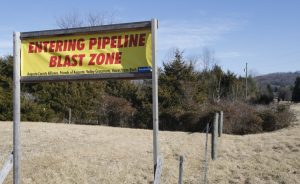 Despite a victory last month at the United States Supreme Court over a critical permit, Dominion Energy and Duke Energy said in a news release that “recent developments have created an unacceptable layer of uncertainty and anticipated delays” for the 600-mile (965-kilometer) project designed to cross West Virginia and Virginia into North Carolina.

The companies said a recent pair of court rulings that have thrown into question a permitting program used around the nation to approve oil and gas pipelines and other utility work through wetlands and streams presented “new and serious challenges.”

“This new information and litigation risk, among other continuing execution risks, make the project too uncertain to justify investing more shareholder capital,” the news release said.

The massive infrastructure project, announced with much fanfare in 2014, had drawn fierce opposition from many landowners, activists and environmental advocates, who said it would damage pristine landscapes and harm wildlife. Getting the project built would have involved tree removal and blasting and leveling some ridgetops as the pipe, 42 inches (1 meter) in diameter for much of its path, crossed mountains, hundreds of water bodies and other sensitive terrain and burrowed underneath the Appalachian Trail.

Opponents also questioned whether there was sufficient need for the gas it would carry and said it would further encourage the use of a fossil fuel at a time when climate change makes a shift to renewable energy imperative.

Legal challenges brought by environmental groups prompted the dismissal or suspension of numerous permits and led to an extended delay in construction. The project was years behind schedule and the anticipated cost had ballooned from the original estimate of $4.5 billion to $5 billion.

Reaction poured in Sunday from the project’s opponents, who lauded the demise of the project.

“If anyone still had questions about whether or not the era of fracked gas was over, this should answer them. Today is a historic victory for clean water, the climate, public health, and our communities,″ Sierra Club Executive Director Michael Brune said in a statement.

The project’s supporters said the pipeline would create jobs, help aid the transition away from coal and lower energy costs for consumers. Economic development officials in distressed parts of the three states it would run through had hoped that the greater availability of natural gas would help draw heavy manufacturing companies.

“Unfortunately, today’s announcement detrimentally impacts the Commonwealth’s access to affordable, reliable energy,” the Virginia Chamber of Commerce said in a statement. “It also demonstrates the significant regulatory burdens businesses must deal with in order to operate.”

U.S. Energy Secretary Dan Brouillette said in a statement the project was killed by the “well-funded, obstructionist environmental lobby.”

“The Trump Administration wants to bring the benefits of reliable and affordable energy of all kinds to all Americans,” Brouillette said. “Unfortunately, the same can’t be said for the activists who killed this project.”

Separately, Dominion, which is headquartered in Richmond, Virginia, and serves more than 7 million customers in 20 states, announced it had agreed to sell “substantially all” of its gas transmission and storage segment assets to an affiliate of Berkshire Hathaway. The transaction was valued at $9.7 billion, the company said.

The assets involved in the sale include more than 7,700 miles (12,300 kilometers) of natural gas storage and transmission pipelines and about 900 billion cubic feet of gas storage that Dominion currently operates, the company said.

Duke, which is headquartered in Charlotte, North Carolina, is one of the country’s largest energy holding companies.

Duke has previously pledged to reach net-zero carbon emissions from its electric generation by 2050, and Dominion has committed to net-zero greenhouse gas emissions by the same year.

A third partner in the Atlantic Coast Pipeline, Southern Company, sold its small stake in the project earlier this year to Dominion, the lead developer. Dominion had asserted its commitment to seeing the project through as recently as mid-June, when it asked federal regulators for an extension of time to get the project into service.

“We regret that we will be unable to complete the Atlantic Coast Pipeline,” Dominion CEO Tom Farrell and Duke CEO Lynn Good said in a joint statement. “For almost six years we have worked diligently and invested billions of dollars to complete the project and deliver the much-needed infrastructure to our customers and communities.”